skip to main | skip to sidebar

It was five years ago, I sat at my job, with the first company I ever worked for watching hurricane Katrina make her way to the coast of Louisana to release her torment on those that never believe the inevitable could happen. Unrelated decisions in my life became interwoven as I walked away from a job I realized later, I was really, really good at to sell my house and move to Key Largo. While I will never regret the decisions Virgel and I made, my heart is still sadden when I think of the amazing friends that became family that we left behind. Anyone who has ever lived in Louisiana or Southern Mississippi must confess there is a spirt and soul in the culture and community that is not found anywhere else. It captured our hearts, and I am confident it will never let go. So on our journey, the three of us started out.

Our adventure in Key Largo was met with the glorious arrival of my son, and a boss I didn't enjoy as much. A level of stress I thought I level behind was elevated more than I dreamed. I found solice in my growing family, a lifelong friendship, and the feeling that comes over you when you drive over the first bridge into Key Largo, with Gilberts on bayside and mangroves on the other, peace, calm, and the tranquil color of the water over take anyone. Despite, this we knew in our heart of hearts, we could not stay. Maybe a different time, it would have been right, but not then. We had to go.

Once again, we found our selves facing moving trucks, job negotiations, and a long drive with true friends in the rearview mirror. Along the way, I had plenty of time to think about how this journey began. Was the first decision right, wrong? Is the ride part of the path? This time there were four.

Nebraska? Yeah, I didn't think that the journey would take us there, but it did. Realtors, searching and another house bought. It wasn't finished, of course. That wouldn't be our style. New jobs, new personalities, new daycare a house to finish. If we had time to sleep, we wouldn't have known what to do, but then I might have realized how many countertops I had tiled, or floors we had finished. Nope, just a step. Fate was changed when the phone rang, and soon Virgel's Dad was gone. I realized then how much my little Ani really loved her Papaw. That is when my heart broke. Soon, Virgel's Mom moved closed by.

Some days when you are not looking, you realize you are just existing, managing with what it is. You are not unhappy, but not over joyed. That ringing phone with the offer on the other end, looking for you, sets the wheels in motion again. Realtors, moving trucks, cries from my little girl. This time, there are five.

We found a new home, which wouldn't have been perfect even if it was perfect. Lots of hammers, nails, grout, tons of paint, and she is almost there. Home, again. I don't want to move again, I don't want to work for another company, have a fifth retirement plan, sell and buy more property, buy another refrigerator, landscape another house for someone else to enjoy. Of course, I could do all of these things again, if I had to, but I don't want to.

I want my children to remember home, and our summers on the lake, our vacations to see all the friends we have made and said good bye too.

This is the short story, just a tid bit of the five years that have gone by with such speed, and fury, and activity, I didn't realize it had only been five years, maybe ten. Surely it has been ten years? My only evidence that the weather channel doesn't have the anniversary wrong, is Ruston is only four.

Your gonna miss this,
Your gonna want this back,
Your gonna wish these days hadn't gone by so fast. . .
This song rings in my head every day,
every moment,
as I watch the kids play and laugh and act silly.
I know . . .
I am gonna miss this. . .
much sooner than I expect. 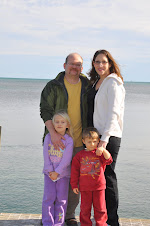 My Family - it is all I really Need

furrfamily
Our lives are defined by moments frozen in time in our memories. I am no different. I remember my bicycle wreck in California when I was 4, moving across country with my family when I was 7, catching lightening bugs in the yard, my baby cow - named cricket, my grandma's visit, summers on the boat, my mom dying at 15 and life never being the same, meeting the love of my life, at 16, my wedding, buying my first house, the birth of my daughter, reuniting with my family, selling my first house, the birth of my son, loosing my father in law. All along the way learning lesson in life and growing up - which I have learned didn't stop at 18.